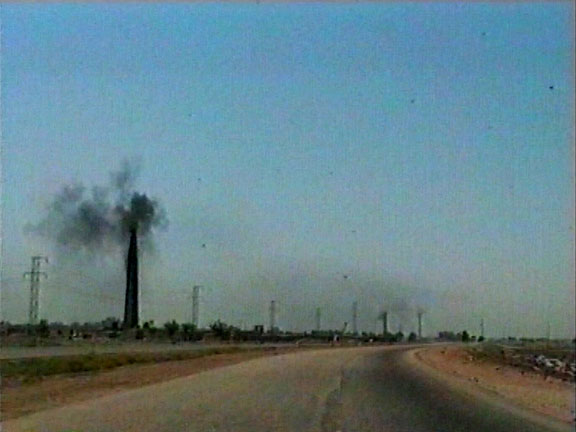 ‘The eye is reality’. The whole world is concentrated in its arc. Yet, you only see the segment that is you. What you see, is what you are. Moment to moment, seeing what you see, thinking what you think, feeling what you feel, knowing what you know, you weave the web of reality.’ (Voiceover in ‘INVISIBLE’)

In 1995 I made two journeys to Iraq. Neil van der Linden had invited me to travel with him after seeing my piece, A Tous Ceux Qui Tombent at the Triple X Festival in Amsterdam. We both shared a keen interest in Middle Eastern culture and also an awareness of the entanglements of the politicised nature of the Western gaze upon this region. A UN embargo, imposed after the first Gulf war made traveling to Iraq a rarity and only few images came out of the country that were not in some way propagandistic in support of one or the other side of the warring factions. The visit came about on invitation of Faisal Al-Jasiri, at the time head of cultural Television in Baghdad. There were no strings attached except the obvious one's which were related to venturing into a totalitarian space. The spontaneous nature of the voyage meant that I did not have any time to define clear objectives for this journey beforehand. So I suddenly found myself in what by then had become something of a white spot on the map for most Westerners. I came back with a lot of footage, which proved to be uninteresting mainly because of the restrictions imposed upon my filming by the regime.Back in Europe I managed to forge some of the footage into a film that dealt with the potentially deceptive relationship between thought and image. Later I realized that the route featured in the film became the itinerary of the US invading forces as they pressed on to Baghdad in the fateful days of April 2003. Not much of what is seen in the film will still be left standing.