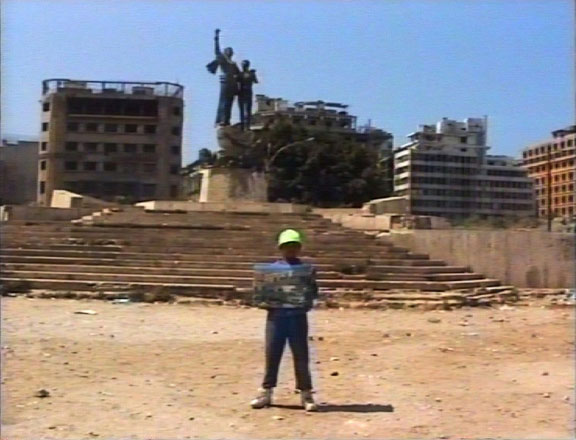 The title of the piece is borrowed from a play by Samuel Beckett. In 1994, my then partner Désirée Delauney
and I were invited to the Triple X festival in Amsterdam to produce a new site-specific performance work. I had
already stopped dancing, but we decided develop ideas related to an earlier duet ICI, MAINTENANT OU JAMAIS, a piece that incorporated a film made among the ruins of Pompei.

In both pieces I was interested in the aesthetics of destruction. But while Pompei was the result of the violence of nature, Beirut was a man-made catastrophe. It had recently emerged from a horrendous civil war. For more than 17 years the world had followed the various phases of its devastation: factional wars inside other wars, self perpetuating war systems, economies of destruction, played out on a geo-strategic chessboard that involved the Palestinian question and the Iranian Islamic Revolution.

In 1994 Sarajevo was still under siege. There was a lot of discussion in the art world about how to position oneself within the iconography of violence. Susan Sontag had been directing ‘Waiting for Godot’ in a candlelit Sarajevo theatre the year before. The horrible news about the genocide in Rwanda was filling the TV screens. Long lasting conflicts were raging: Belfast, Algeria, Nagorno-Karabakh... I remember reading an ironic piece about war-tourism, featuring an artist-kit that included a bulletproof vest, cassette recorder and the new compact Super-8 video camcorder. In Beirut however the war had finally ended. The hostage crisis that had turned Lebanon into a black hole for Westerners (the many Lebanese hostages were never mentioned in the press) had come to an end in '92. It was now safe to travel in Lebanon, but the scars were still fresh and very deep.

I will never forget the intense visceral sensation of violence I experienced by just seeing the image of destruction in three dimensions - an image inseparable from the smells of garbage, the sound of generators and the sensorial overload of devastating detail. I spend four weeks in Lebanon, traveling extensively through the country, except  its southern part, which was still under Israeli occupation. Coming back from Beirut to the calm of Amsterdam produced a second shock for me. Aside from some photos and texts that made-up the performance A TOUS CEUX QUI TOMBENT, there is no other form of documentation of the piece that remains.